History of Ilminster  An ancient Market Town, Ilminster’s recorded history goes back 1,000 years, with the town celebrating in 1995 the  millennium of the grant of it’s market town charter.  In the 1660’s Ilminster was the fourth largest town in Somerset with a thriving cloth industry and providing an important coaching stop on the route to the West from London. The magnificent Church of St Mary, the Minster,  in the town centre, now designated as a Grade I listed building, dates from the 15thC. 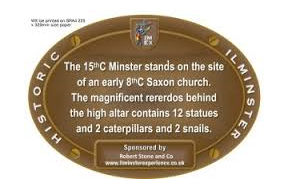 Ilminster’s heritage, from the most significant to the everyday, is celebrated in a series of carefully researched historic tablets displayed in an Historic Trail around the town in shops and private houses.

..enjoy a virtual stroll through history with the Historic Trail guide leaflet , and then try out the Quiz in the leaflet image below. 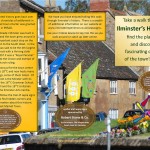 Plaque Copy:      A market has been operating continuously in this square since the town charter was granted in 995.  The Market House in the centre was renewed in 1795.

Question:   How long has the market been running?  Answer:  Since the market town charter was granted in 995

Website Info:   The Market Square ‘house’ as seen today is relatively modern, described in 1795 as new – this was where you’d buy your eggs, cheese and dairy products.  Alongside the Market,  running 80 or 90 feet (about 30 metres) long towards East Street, was the ‘shambles’.. a disarray of market stalls which traditionally butchered meat as you bought it. Markets were on Wednesday and Saturday.

Read the Monmouth rebellion board on the south side and imagine how the market place would have looked with the old Oak tree next to the water stoop.  This was not an area to hang about in.

The four roads entering the square are basically built on the compass points, north, east, south and west.  North Street the direction from which all the London coaches arrived … over the hill and down Old Road, straight into Langport Street, squealing to a halt alongside the animals in Market Square.  A choice selection of coaching inns offering to quench your thirst or deliver fast food whilst the horses where changed and you rolled on to your destination – if you were to stand at the corner of Ditton Street you would be able to see at least six inns.

Ilminster was, and still is, at a major crossroads for travelling into the further wilderness of the wild west of England.   Before the canals and railways, industries relied on the horse and carts to distribute clothes of many materials around the country.  Serge and wool were spun dyed and woven locally as was sail cloth, broad and narrow cloths as well as horse-hair.  Later, silk mills provided employment for many as did cottage industries such as glove making.  In the 1600’s the leather industry was flourishing if only to furnish horse and coaches.  But where in town  is the blacksmith?

Sadly, after the great fire of 1661 daily life was so bad in the town  that rolls were called up and down the country asking for relief for the people of Ilminster.

Things were better by 1685 – or were they?  Ilminster was able to send 54 men to the rebellion who were defeated at Sedgemore, some hanged in the square.  Locals who were executed for taking part in the Rebellion in support of Monmouth include: